What we think of now:

Robinson Meyer wearing his face camouflage to hide from surveillance cameras for an article in the Atlantic magazine.

He mentions the WWI camouflage of boats

“I should step back. I had slathered the paint on my face in order to hide from computers. The patterns in which I applied the paint were important: To the pixel-calculating machinations of facial recognition algorithms, they transformed my face into a mess of unremarkable pixels. In the computer’s vision, my face caused a momentary burst of confusion.

That’s why the patterns are called computer vision dazzle (or CV dazzle). When it works, CV dazzle keeps facial-recognition algorithms from seeing a face. The technique takes its name from the dazzle camouflage of the two World Wars: The Great Power navies sought to protect their ships not by hiding them among the waves but by obscuring their size and movement. CV dazzle was developed by the artist, designer, and entrepreneur, Adam Harvey, who created the patterns as a student at NYU’s Interactive Telecommunications Program.”

What we thought yesterday:

Camouflage is designed to blend into the background so that its wearer cannot be seen. 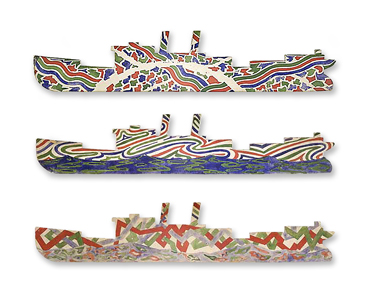 Inventor of and sole practitioner of 299-word Very Short Novels. www.davidbdale.wordpress.com
View all posts by davidbdale →
This entry was posted in davidbdale. Bookmark the permalink.

1 Response to Definition of Camouflage